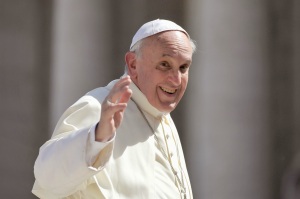 I am glad the Pope is gone.

Not because of anything he said or did, but because of the medias repeated categorization of him and his visit to our country. From the politicizing of his comments to the belief that long-term effects are all but zero on the people of America. Just behind the visuals depicting masses of adoring followers, motorcades, Fiat 500 references, and his undeniable passion for the oppressed, was a disregard for anything being truly accomplished

I disagree with that assessment… and I will tell you why.

First, I was sickened by the medias continual comparison of pope Francis to a “rock star.” This humble, gracious and deeply spiritual man who is loved by millions isn’t as shallow and dependent on the approval of the masses as someone in the entertainment industry. The Pope didn’t arrive in our country to put on a show and perform on stage in scantily clad outfits and dance and sing suggestive content. He isn’t a person who is “in it for the money”, or to entice the observer into thoughts and actions of a less than honorable nature. No, he came with a message of grace and humility, of care and responsibility for children and the disadvantaged, of wisdom in utilizing resources and our environment. I am not Catholic but was moved several times to tears by his humility and love. He openly shows the attributes many of us lack, so we bring him down to a symbol we understand, worldly and compromised.

There were also the comments made on political shows saying that he was to far-reaching in his encyclical to the Bishops, where he addressed issues that aren’t merely important to activists and politicians but vitally important to every human being. Are these topics of conversation only to be discussed by the so-called experts, or are they every one of our responsibility to understand and influence?

Then there were questions as to the lasting effect this visit of his holiness would have on our country. There was talk of the infighting politically just hours after his speech to the congress of the United States. The point was made that in this age of instant trends and constantly breaking news, not to mention ridiculous attention paid to social media, the Popes visit and impact would quickly fade. I did hear one commentator say that this event would live on in the hearts of people, I will give them that at least! The fact is that personal change cannot be accomplished externally. While we can be inspired from outside ourselves, true change must be initiated from within ourselves through God-given revelation, personal reflection, spiritual seeking, reading God’s Word, prayer, and being relentlessly honest with who we are.

Whether you are Catholic or not it must be recognized that the media portray’s any form of belief in God negatively. Their obviously humanistic and godless philosophy is put forth and recognizable in several forms; from advertising meant to make you think you deserve something specific, to the programming content which pushes agendas that undermine the truth of God’s word and mock Him, to the particular news stories told and the way they continually throw stones at Christians.

I am not a protester, or petition starter, but I am a pray-er, and I pray that my heart will be softened to the plight of the fatherless, the refugee, and the destitute. That I will not be able to look beyond the pleading eyes right there in front of me. That we would all find the inspiration and vision to be difference makers for others in the scope of each of our lives. I pray that God continue to work in us great humility and grace for others, serving the least of these.

31 “But when the Son of Man[d] comes in his glory, and all the angels with him, then he will sit upon his glorious throne. 32 All the nations[e] will be gathered in his presence, and he will separate the people as a shepherd separates the sheep from the goats. 33 He will place the sheep at his right hand and the goats at his left.

34 “Then the King will say to those on his right, ‘Come, you who are blessed by my Father, inherit the Kingdom prepared for you from the creation of the world. 35 For I was hungry, and you fed me. I was thirsty, and you gave me a drink. I was a stranger, and you invited me into your home. 36 I was naked, and you gave me clothing. I was sick, and you cared for me. I was in prison, and you visited me.’

40 “And the King will say, ‘I tell you the truth, when you did it to one of the least of these my brothers and sisters,[f] you were doing it to me!’